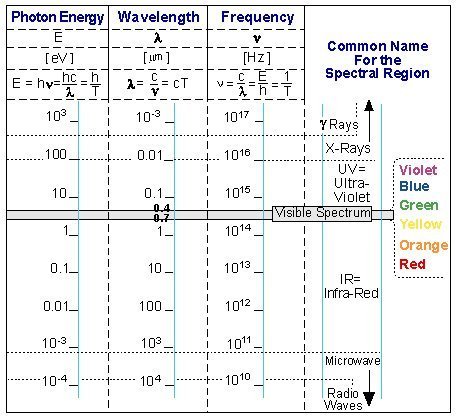 The most important ideas summarized in figure 1.4 are:

Examples for electromagnetic waves are:

The theoretical analysis of electromagnetic waves was the work of James Clerk Maxwell (1831-1879), and it is summarized in 4 equations (which are beyond our scope) bearing his name.

The discrete aspects of electromagnetic radiation is the result of Einstein’s work at the beginning of the 20th century.

Light Velocity in Matter
When electromagnetic radiation passes through matter with index of refraction n, its velocity (v) is less than the velocity of light in vacuum (c)
, and given by the equation:

This equation is used as a definition of the index of refraction (n):

Wavelength in Matter:
We saw that the velocity of light in matter is slower than in vacuum. This slower velocity is associated with reduced wavelength: l = l0/n
, while the frequency remains the same (see figure 1.5).

Figure 1.5: Change of wavelength in matter